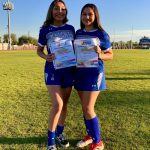 This weeks Character Counts goes to Neolin Abundis and Abigail Galaz. These two girls are the example of ENERGY on and off the field. Both girls pressure and attack at full speed never letting up on our opponents! At practice both girls give 100% and are ready to push themselves to the limit!

The Westview Soccer team moved through the group stage of the Barry Goldwater Bulldog Tournament earlier this week. The team held their opponents scoreless over the 3 games while tallying 12 of their own. Leading the way for the Knights were Meer Saeed and Robert Rodriguez each bagging three goals over the early week games.