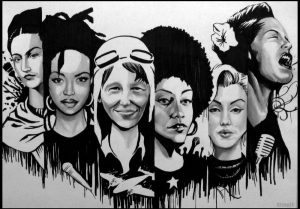 March was National Women’s History Month, dedicated to women who contributed in history, society, and helped future generations of women earn equal rights in the U.S. It took many years to get women the recognition they deserve. Many women before us took a stand and made sure their voices were heard.

What is National Women’s History Month?

National Women’s History Month started Sunday, March 1st, and ends Monday, March 31st. The month became an official monthly celebration in 1987. The month is supposed to make a statement about equality and influence the minds of young children. It honors and shows how far women have advanced. The country did this as a way to show that women are respected and appreciated. The month also assures that the women’s stories will never be forgotten.

Various women have made history their stories are to be celebrated in March. Women like Rosa Parks, who refused to give up her seat for a  white man. She stood her ground and inspired other colored women to do the same. Soon women refused to give up their seats initiating a protest and Civil War. Marie Curie, was a female scientist who changed the world twice, she discovered a radioactive science and her discoveries led to effective cures for some cancers. She was the first female to win a Nobel prize, and the first person to a second Nobel Prize. Ada Lovelace, was a mathematician and declared to be the first computer programmer, an industry run by men.

Women since the beginning time had been told what to do with their lives, but were stiffed by society. Women today have been inspired by past generations to stand up for themselves and demand for equal rights. In some parts of the world women have been successful, but for many women, the constant struggle continues.