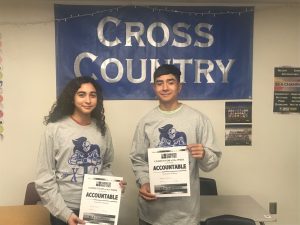 ACCOUNTABLE: A person required or expected to justify actions or decisions.

AILEENE:
“I joined cross country because I like to run long distances and also due to all of the positivity that comes from this sport. I like that even during a race, you are really only battling against yourself, so there’s no need for negativity nor resentment towards anyone during, before or after a race. What I like about this year is that there are a lot of people on the team. What I’m looking forward to is not only to better myself, but to also help my teammates in the process and to see our growth as individuals but also as a team.”

Aileene came to XC from track and field. She graciously stepped up and took over the head girl’s captain position when we were in need. She has always been a leader, and is flourishing in that role with the team. She is always positive and looking for the next thing she can help with. Although this is her first year running XC at Westview, she has experience running 5K’s on her own and with her family.

RICHARD:
“I joined cross Country because I’ve heard people talking about it in track and decided that I wanted to challenge myself and take the opportunities Cross Country had to offer. I want to make the most out of my last year at Westview. Running long distance in track used to get to my head so I think its a good time to face that fear and get rid of that mindset. What I really like about Cross Country is the work ethic of the team and the edge you get from getting up early in the morning, getting out there, and putting in the hard work knowing that a lot of people don’t do this kind of stuff. I’m looking forward to see the overall improvement of the team at the end of this season as I believe the most satisfying thing is reaching the goals you set through adversity, but regardless on where they progressed I’d be happy to see them pushing through until the end of the season.”

Richard is the type of athlete every coach wants. He is extremely coach-able, putting in 110% at ALL times. He is constantly taking the time to assist his teammates in their experience, and skill. If something needs to be done, or addressed, Richard is on it before the coaches even need to ask. He strives for his own success and the teams’. He is not only a great athlete, but a great role model both in athletics and academics.

Neither of these athletes have run XC, and yet they are both great captains. They have pushed themselves physically to be better in their athletics, while still assisting coaches and teammates. We could not have asked for more upstanding, incredible young leaders to be our captains this season.

“There are three principles of dependability: taking full responsibility for the task; following the task to fulfillment; and standing by the result.”-Travis Lamb

“One of the greatest compliments you can get from others is that you can be counted on when it counts.”-John Maxwell