A Swim to Remember 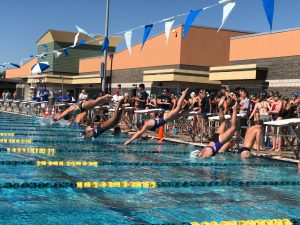 The Westview swim team was a team to remember. With improvement in sprints and scores overall, the team became a bonded society filled with friendship. A team member, Sloane O’Neil, said she put in a, ”100 meter backstroke in 55 seconds.” They swam their way to victory and a couple of their athletes agreed to an interview.

Sloane O’Neil, a freshman, said that her top finishes were in backstrokes. She addressed how she improved from the beginning of the season, because she “started off knowing how to swim but not all of the strokes.” O’Neil now knows all of the strokes and increased her speed. She feels that the difficulty of each meet was different and could not name the hardest. With her backstroke scores and her improvement, O’Neil plans on continuing to be on the team next year.

Jagar Quinones, another freshman athlete,  believes that his top finishes were backstroke and freestyle. He improved, ”physically, motivationally, and organizationally.” He felt like the biggest competitor was himself. Quinones tried to set goals and pushed himself past them. He said he ended up, ”accomplishing more than I ever expected.” Even though he worked past these hard set goals and got more backstrokes and freestyle points, Quinones does not think he will be joining the team

With the swim season being over the time for reflection has come and gone. Next year when swim season starts up, the team will continue to grow together. We are looking forward to the next season, and to watch our water-bound Knights continue to be strong.