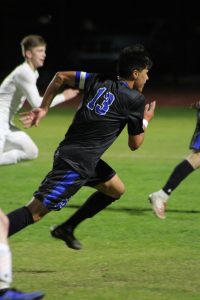 This season Westview soccer has been as good as ever! The Knights soccer players are putting their all on the field every game. Lead by Coach Bower the Knights are currently holding an impressive 11-2 record. Their season has been nothing short of magnificent.

The Knights started their season on fire going on a three game winning streak. They won their first game at home against Buckeye High School in what would be a 6-0 victory. Then going on to play Peoria High School in what would be shutout 9-0 win! Westview then won their third game in a 2-1 victory against Verrado. The goal scored by Verrado  was the first scored on the Knights this season!

Westview then took a 2-1 loss to Sunrise Mountain in the semi-finals of the Bulldog Invitational. The Knights heated up for the next two games, with back to back victories against Horizon and Mountain View. Westview then took a tough Desert Vista 2-1 loss! After the loss the Knights really shifted gears and are on a 6 game winning streak!

This season Forward, Chase Arlak is putting together an impressive senior year resume! He is currently averaging 1.2 goals a game and 14 overall this season! Right behind him is Luis Gandara with 1 goal a game and 11 this season. The two are leading the way for the Knights with Coach Bower at the helm.

The Knights varsity soccer season has been off to a great start to say the least. They have done everything you can ask for as a team they play well together and want to win. If they keep playing the way they have been there is no telling how far this team can go!