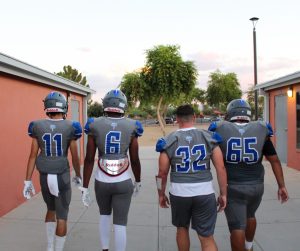 showed grit and grind all season long by rebounding from close losses early in the season. Westview Head coach Nick Gehrts guided the team to an 8-3 record, another region title and playoff berth.

Westview started the season by losing the first game against Desert Ridge 23-17. Shutout wins versus against Mountain Ridge and Alhambra followed the opening loss. The two game winning streak was cut short by Red Mountain in a heart ripping 24-21 loss. Although the game was a loss the Knights felt they should’ve won, they rebounded with a marvelous six game win streak.

Westview’s 8-3 record was good enough to secure a 13th seed playoff berth versus Liberty High School. The game was tough. After the first two quarters, the Knights trailed Liberty 42-0. The Knights showed resilience scoring a touchdown in the third quarter and two in the fourth quarter. While the game evidently ended up with Westview going home in a 56-21 loss, the teamed showed fight and pride, which is all you could ask for as a fan.