Goals and insights of the WHS Wrestling Team 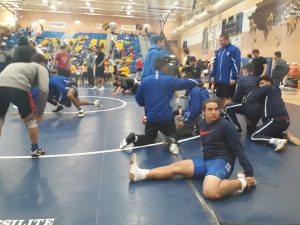 Our school’s winter sports are kicking off and wrestling is here to make an impact.  As the season reaches its fifth week, and the second week of competitive wrestling, I got a chance to talk to the head coach, Mr. Burgess, for more information on the team’s goal this season.

When asked about how the previous matches went, he said the team did okay, they dropped some points and then gained some but they’re in “the middle of the road”. His goal for this season is to “take the returning players that are seniors to the Placid tournament” and to “take five or six players to the state tournament,” which can be “achieved through practices, dedication and being focused,” said Mr. Burgess. The team improves their strategies by learning from the opposing team who they face multiple times throughout the season.  I asked if Mr.Burgess could name some outstanding individuals. He said “Jorge Chaidez and Dylan McGuire, both had a really good start to their season”. They competed in many tournaments and had great results. If you’re interested in wrestling be sure to take part in the off season program to have an opportunity at competing in the upcoming Spring and Summer season, Mr. Burgess encourages.